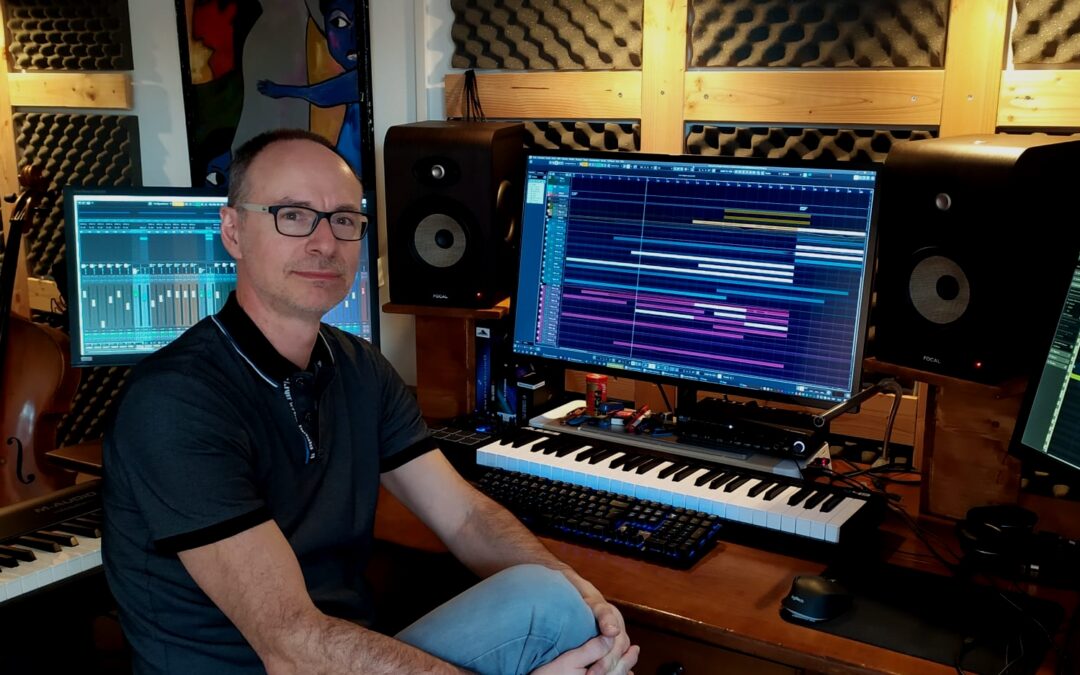 Peter Hauser is one of the creative minds behind Epic Lab. His compositions have been praised for their ability to get stuck in people’s head, for their catchy themes and poetic touch. Learn more about his creative process, his equipment and his philosophy in our short interview.

How do you go about composing?

It depends whether I’m composing for a film or just a piece of music. With a film, I let myself get inspired by it and only begin to look for the right themes after I’ve understood the mood of the film. With a piece of music, I just get playing on the piano and try things out.

What software/equipment do you use?

Basically, I need a high-end PC (32 GB RAM, 8/16 cores) with three screens, and I use Cubase Pro as a DAW (Digital Audio Workstation). That’s more or less the platform in which everything happens. On top of that, there are lots of plug-ins like full classical orchestras, drums, synthesisers etc. In particular, it’s worth mentioning EastWest Hollywood Orchestra, Nexus 3, Omnisphere 2.6, Kontakt and numerous other plug-ins – especially those for killer drums and experimental sounds. Then it’s a 49-key keyboard for quick editing, an 88-key keyboard with weighted keys for trying things out, special Focal monitors, a Steinberg audio interface, microphones etc. and, last but not least, my cello. The list is long with a price tag to match, and this isn’t exhaustive.

Which film scenes do you find most difficult to set to music?

Setting animated films to music with squeaking clarinets and violins playing scales is a challenge and, stylistically, not my thing. On top of that, the music has to mirror the action exactly in hectic scenes, which demands an immense amount of compositional work – the musical arc must not get lost.

You are the solo cellist of the Bern Symphony Orchestra – how is film music related to opera?

There are huge parallels – in the orchestra pit we accompany the scene(s) or the action, as the case may be. In essence, film music has the same or, at the very least, a similar function. In opera, the drama is predominant, which is probably why I prefer dramatic and powerful music to lightly operatic sounds…

For you, what makes good film music?

When you don’t perceive it as a foreign entity and, instead, it merges with the scene in perfect symbiosis. Particularly in scenes that constitute a climactic point in the plot line, the music comes to the fore and in that moment, has an almost ‘greater’ significance because strong emotions arise from the music first. ‘Schindler’s List’ without the wonderful music by the equally wonderful John Williams – it’s unthinkable. In films without much dialogue, music takes on a particularly special function. When I compose music, I need to feel goosebumps down my spine; if that’s not the case, I think I’m doing something wrong.

Let’s stick with John Williams – one of his (first) major projects ‘THE POSEIDON ADVENTURE’ (1972) was recorded with a classical orchestra in what would today be considered a modest studio. You can clearly hear these powerful sounds; quasi precursors of today’s blockbusters with their modern sound – lots of horns and warm strings, in particular. At the time, the young Williams was the pioneer of modern film music. We were next able to experience another dimension of this in ‘Indiana Jones’, for example. Today, it’s impossible to imagine a world without the digital; ‘Dunkirk’ by Hans Zimmer, for example, interweaves real orchestral and synthesised sounds. The size of the orchestras and the composition of the instruments has also changed. Many films (especially series) are not accompanied musically by real orchestras, however, because there is simply not enough money or time. In this event, we fall back on libraries with individual sounds that were recorded by real orchestras. What would have been unthinkable in the 80s is standard today. Interestingly, this is no real competition to film music orchestras – although there are plug-ins that are in no way inferior to the sound of a real orchestra, film music with real orchestras is more in demand than ever.

What would be your dream project?

I don’t think I can answer that question easily. It’s probably not until much later in life that you understand what was, or was not, a dream project. The path to the ‘dream project’ is littered with hurdles, paving stones and big obstacles. If these can be overcome and the end result exactly corresponds to your ideas, then it is certainly a dream project.