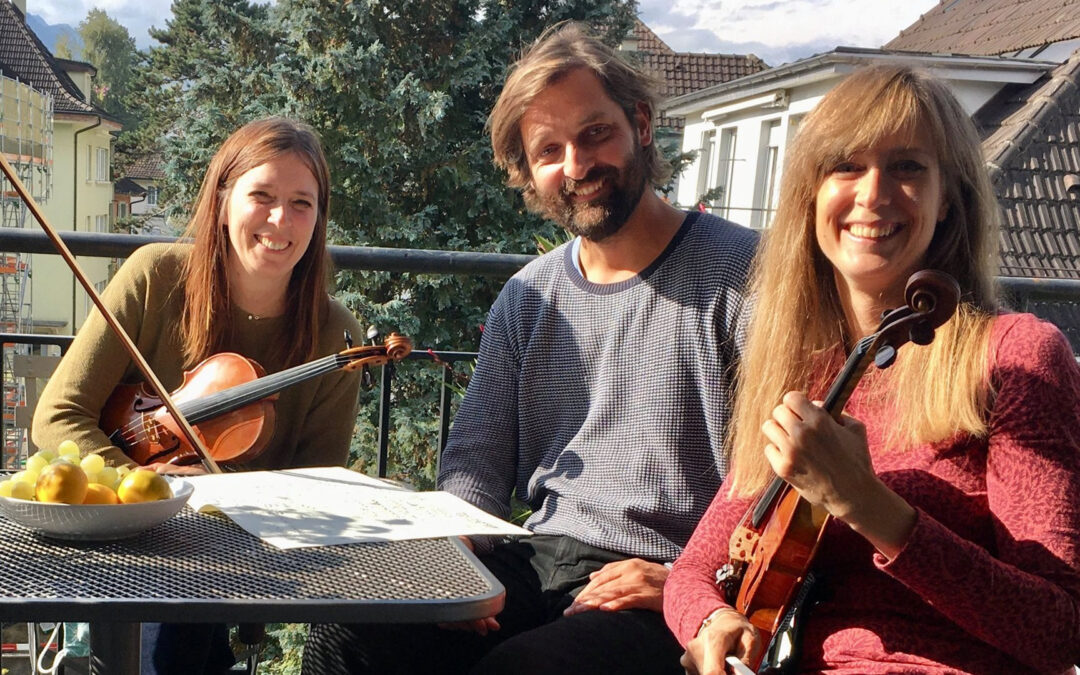 In 2019 Helen Steinemann and Regula Dodds commissioned the composer Niklaus Vogel to compose a duo for two violins for their concert entitled “à la Mozart”.

The resulting musical work “Steppenwolf” was premiered on October 19, 2019 in Ebikon and has already been performed several times in public, including at the lunch and Fyrabig concert of the Zug Sinfonietta in Zug and in Rotkreuz in autumn 2019. The work inspired by Hermann Hesse’s “Steppenwolf” was received with great enthusiasm by the audience. 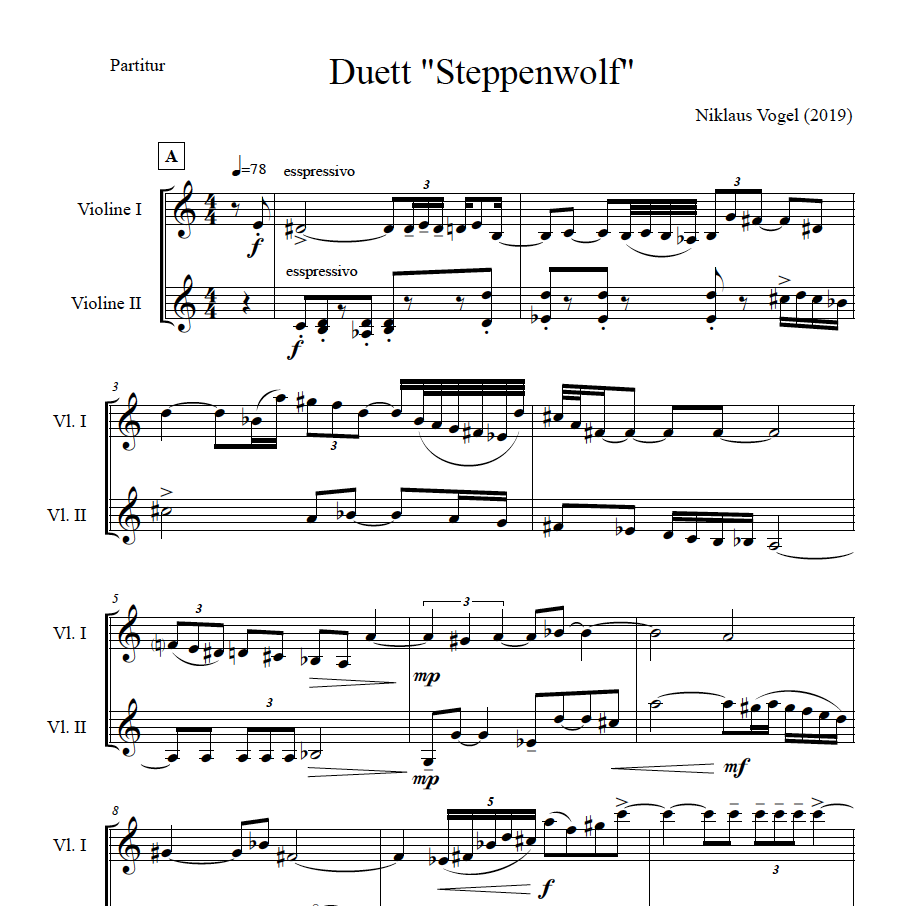 The piece lasts around 11 minutes. Since it is extremely pictorial, emotionally charged, creative and musically multifaceted, Helen Steinemann and Regula Dodds decided to develop the project further. In July 2020, the two violinists recorded the piece as a basis for the production of a music video. The concept and script for the film comes from the composer Niklaus Vogel himself, who brought the filmmaker and musician Andreas Graf to the side. In addition to the Schweizerhof Lucerne, the Engadine with its contrasting and mystical backdrop, the lovely Lake Sils, the wide plains and the rugged high mountains served as the location for the shoot.

The concept is based entirely on the ideas and inspirations from Hermann Hesse’s novel of the same name, which contributed to the creation of the music. In addition to the music, the deliberately chosen scenery of the Engadine around Sils Maria, where Hesse spent many summers, also plays a decisive role.

The music leads the two protagonists on a mystically fantastic journey into their inner life. Behind the bourgeois facade of culture and elitist conceit, a mystical archaic world opens up to them, reflected by the beauty and wild ruggedness of nature. Here they come into contact with a shadow figure. Ultimately, their own shadow. Joke and madness sometimes alternate from grotesquely lovely to destructive and finally condense into an ever faster turning carousel. The question remains until the end, whether the demons can be dissolved or not. The concert ends; the two musicians purified from their journey.

In addition to the shadowy figure, the lake acts as a symbol for the soul and at the same time as a deceptive idyll from which one does not seem to be able to escape. The island serves as an allusion to the “island of the dead” and the concert hall with the Hotel Waldhaus stands as a traditional institution, from which the violinists are shown a path through music into their abysses and back again.

Fortunately, in Helen Steinemann-Müller we had an excellent location scout, who was able to present us with a wonderful selection of photos in advance, on the basis of which a corresponding shooting plan was created. The shooting started early in the morning in the cold on Lake Sils. Here are a few impressions from the set in the Engadine. Enjoy! 🙂 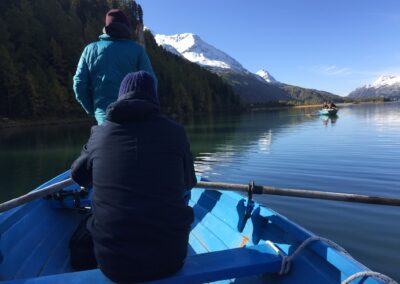 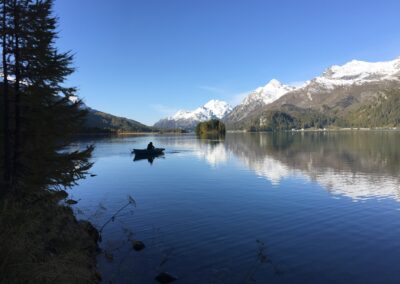 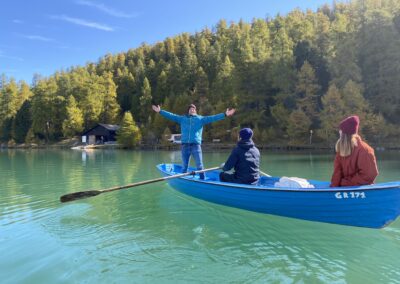 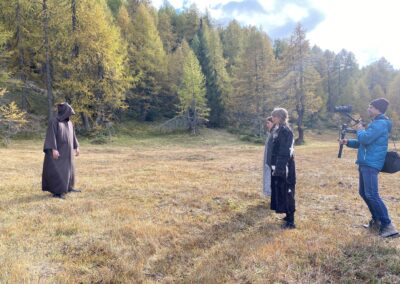 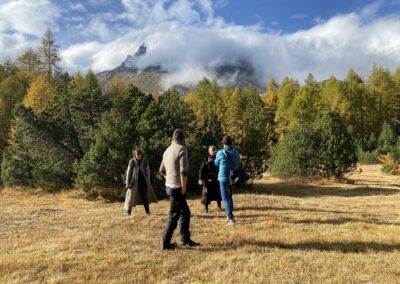 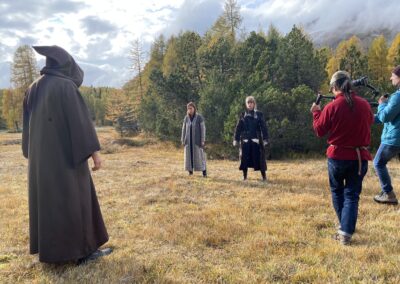 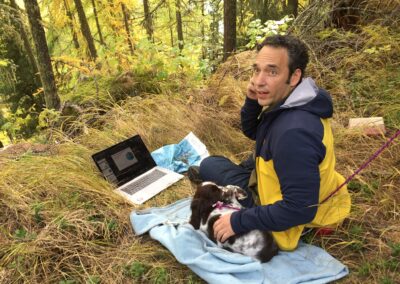 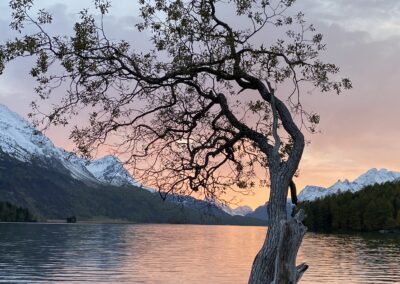 Helen Steinemann grew up in Baar in the canton of Zug. She completed both her teaching and concert diplomas at the Lucerne School of Music with Daniel Dodds and Edith Peinemann with the distinction of “distinction”. Helen Steinemann attended master classes and seminars with Kristof Wegrzyn (Hanover) and Rudolph Baumgartner. In 1998 she received the Dr. Walter Strebi Prize, 2000 the Kiefer Hablitzel Foundation Prize and the Canton of Zug Prize. From 1998 to 2004 she was a member of the Festival Strings Lucerne. Tours and concerts in Europe, Japan, South America, South Africa and CD productions followed. Helen Steinemann is a founding member of the Zug Sinfonietta and regularly plays in various chamber music ensembles. Since 2003 she has been teaching at the city music school in Zug.

Regula Dodds grew up in Baar (ZG) and received her first violin lessons at the music school in Zug at the age of five. At the Musikhochschule Luzern she obtained the teaching diploma “with distinction” from Daniel Dodds. She then studied in Professor Sebastian Hamann’s class and completed her studies in 2007 with the concert qualification exam. Master classes with Peter Zazofsky (Boston), Prof. Adelina Oprean (Basel) and Isabel Charisius (Alban Berg Quartet) as well as numerous chamber music courses with Prof. Sebastian Hamann gave her creative impetus. Regula Dodds received the Acknowledgment Prize from the Axelle and Max Koch Cultural Foundation, the Walter and Maria Strebi Prize and the sponsorship prize from the Canton of Zug. She is a member of the world-renowned chamber orchestra Festival Strings Lucerne, the Zuger Sinfonietta, and plays in various chamber music formations. Regula Dodds teaches a violin class at the Hünenberg Music School.